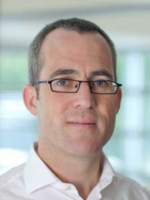 Michael Hauptmann received a Ph.D. in Statistics from the University of Dortmund, Germany, in 1999. He was a principal investigator in the Biostatistics Branch of the Division of Cancer Epidemiology and Genetics of the U.S. National Cancer Institute in Bethesda, Maryland, until 2006 and Head of the Biostatistics group in the Department of Epidemiology and Biostatistics at the Netherlands Cancer Institute in Amsterdam, The Netherlands, until 2019. Since 2019, he is a professor of Biometry and Registry Research at the Brandenburg Medical School Theodor Fontane in Neuruppin, Germany.

Dr. Hauptmann’s experience in radiation epidemiology spans low to high doses from occupational and medical sources. For many years he has been chief statistician for the US Radiologic Technologists Study, which evaluated occupational exposures to diagnostic radiation, including cancer and non-cancer outcomes as well as gene-radiation interactions and biomarkers for dose assessment such as chromosomal translocations and DNA damage. He is currently involved in several studies of medical radiation exposure, including an international consortium on gastrointestinal tumors among cancer survivors as well as a European consortium on radiation exposure from pediatric computed tomography scans and cancer risk, for which he has conducted a large cohort study in the Netherlands and is leading the statistical analysis of the pooled data.

Besides radiation research, Dr. Hauptmann concentrates on methodological and statistical topics in clinical epidemiology. He is closely involved with several international epidemiological studies on cancer etiology and late effects of cancer treatment.

Dr. Hauptmann is a Statistical Editor of the “Journal of the National Cancer Institute” and the “Journal of Clinical Oncology ”, and Member of the Editorial Board of “Cancer Epidemiology”. Further, he reviews manuscripts for several journals as well as grant proposals for the European Commission as well as other Dutch and international funding agencies. He has been a Member of the Working Group for the IARC Monograph on formaldehyde (2004), and is a Member of the International Commission on Radiological Protection (ICRP) Committee 1 "Radiation effects"  since 2013.