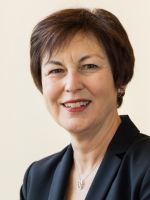 Dr. Cousins studied medicine at the University of Nottingham, UK and graduated with a Bachelor of Medical Sciences, 1st Class in 1982 and Bachelor of Medicine and Bachelor of Surgery with Distinction in Paediatrics in 1984. She worked in Nottingham post qualification and trained in radiology there for three years before moving to the Hammersmith Hospital, London as a Senior Registrar. Dr. Cousins specialised in interventional radiology and was appointed Consultant Radiologist in 1993. In 1999, she was appointed as Consultant Radiologist at Addenbrooke’s Hospital, Cambridge, UK. Since 2008, she was the Lead Vascular and Interventional Radiologist of this very busy unit, retiring in March 2016.

Dr. Cousins joined ICRP in 2001 as a member of Committee 3 after advising on ICRP Publication 85. She was appointed Chairwoman of this Committee from 2005-2009, was elected Chairwoman of the Main Commission for 2009-2013 and re-elected for a second term 2013-2017. Dr. Cousins was a co-author of ICRP Publication 105, Radiological Protection in Medicine and was the co-chair of Task Group 62 leading to Publication 120, Radiation Protection in Cardiology.

Dr. Cousins was a member of the British Institute of Radiology Radiation Protection Committee from 2006-2015, being Secretary of this Committee from 2011. She was the Programme Director for Radiology Training in Cambridge from 2001-2005. She was a member of the Clinical Senate for East of England, acting as an expert adviser, and also the lead interventional radiologist for Specialist Commissioning in the region. Dr. Cousins still acts as an expert for health service provision in different regions of the UK and remains a reviewer for radiology journals.